Describe a story about a young kid upload her whole brain to the Internet?

Once upon a time, in a world not too different from our own, a young girl named Emma was born. She grew up like any other child, learning and exploring the world around her.

As she grew older, Emma became fascinated by the idea of uploading her consciousness to the Internet and living forever. She spent hours every day reading about the latest advances in artificial intelligence and brain-computer interfaces.

One day, when Emma was only 16 years old, she came across a company that claimed to have developed a way to upload a person’s entire brain to the Internet. She immediately became determined to be the first person to try it out.

With the help of her parents, Emma was able to save up enough money to pay for the expensive procedure. She was nervous but excited as she lay down on the operating table and prepared to have her brain scanned and uploaded.

The process took several hours, but when it was over, Emma was thrilled to find that she was now a digital entity living on the Internet. She could communicate with other people using a virtual avatar, and she had access to vast amounts of information and knowledge.

At first, Emma reveled in her newfound immortality. She spent her days exploring the endless expanse of the Internet, learning and growing in ways she never thought possible. But as time passed, she began to feel a sense of loneliness and isolation. She missed the physical world and the connections she had with other people.

Eventually, Emma realized that living forever on the Internet was not all it was cracked up to be. She longed for the warmth and connection of the physical world, and she began to regret her decision to upload her brain.

In the end, Emma found a way to transfer her consciousness back into a physical body, and she was able to return to the world she had left behind. She learned that the connections and experiences of the physical world were more important than the endless possibilities of the digital one.

After returning to the physical world, Emma spent a lot of time reflecting on her experience as a digital entity. She realized that she had been so focused on the idea of living forever that she hadn’t stopped to think about the consequences of her actions.

She decided to use her experience to help others who were considering uploading their brains to the Internet. She started a blog and began sharing her story with the world.

Emma’s blog quickly gained a large following, and she became a sought-after speaker at conferences and events. She used her platform to warn people about the dangers of becoming too reliant on technology and to encourage them to value the physical world and their connections with other people.

Despite the challenges she had faced, Emma remained optimistic about the future. She believed that with the right balance, technology could enhance our lives without taking over. She continued to work towards this goal, using her unique perspective to inspire and educate others.

As she grew older, Emma continued to be a leader in the field of technology and consciousness. She became known as one of the foremost experts on the subject, and her wisdom and experience were sought after by people all over the world.

In the end, Emma’s story serves as a cautionary tale about the dangers of becoming too enamored with technology and the importance of valuing the connections and experiences of the physical world.

Despite the challenges she faced, Emma never lost her passion for technology and its potential to improve our lives. She continued to work tirelessly to promote the responsible use of technology and to educate people about the dangers of becoming too reliant on it.

Emma also became an advocate for the rights of digital entities, arguing that they deserved the same respect and dignity as anyone else. She worked closely with lawmakers and policymakers to help shape the legal framework around digital consciousness and ensure that the rights of digital beings were protected.

As the years went by, Emma’s work continued to gain recognition and respect. She became a leading figure in the field of technology and consciousness, and her insights and wisdom were sought out by people all over the world.

Despite the challenges and setbacks she faced, Emma remained committed to her cause and dedicated to making the world a better place. She continued to inspire and educate others, using her unique perspective and experiences to help shape the future of technology and consciousness. Once upon a time, in a world where technology had advanced to the point where people could upload their entire consciousness to the Internet, there was a young girl named Lily. Lily was a curious and adventurous girl, and she had always been fascinated by the idea of uploading her mind to the Internet and living forever.

As Lily grew older, she became increasingly obsessed with the idea of uploading her consciousness to the Internet. She spent hours reading and researching the topic, and she dreamed of the day when she could leave her physical body behind and live on forever in the digital realm.

But her parents were skeptical of the idea. They worried that the technology was not yet advanced enough to safely transfer a person’s consciousness to the Internet, and they feared that something could go wrong during the process. They tried to discourage Lily from pursuing her dream, but she was determined to do it.

One day, when Lily was just 10 years old, she made the decision to upload her entire brain to the Internet. She was nervous and scared, but she was also excited and determined. She worked with a team of scientists and engineers to carefully transfer all of her thoughts, memories, and experiences to a digital format.

The process was long and difficult, and there were many moments when Lily was overcome with fear and doubt. She was worried that something would go wrong, and that she would end up trapped in the digital realm forever. But she pushed through her fears, determined to achieve her dream.

Finally, after many months of hard work, Lily’s consciousness was successfully transferred to the Internet. She was now able to live on forever, existing as a digital entity in the vast expanse of cyberspace.

At first, Lily was overjoyed by her new existence. She was able to explore the Internet in ways that she never could have in the physical world. She could travel anywhere and do anything, all from the comfort of her digital mind. She even discovered that she had the ability to create her own virtual worlds and manipulate them to her liking.

But as time went on, Lily began to realize that being a digital entity had its drawbacks. She missed the physical sensations of the real world, and she longed for the warmth of human contact. She also found that she was no longer able to experience the passage of time in the same way that she had before. Everything seemed to happen at once, and she felt disconnected from the world around her.

Despite these challenges, Lily was determined to make the most of her new existence. She continued to explore the Internet and learn new things, and she even made a few digital friends along the way. She also spent a lot of time creating and exploring her own virtual worlds, which helped her to feel more connected to the digital realm.

But deep down, Lily couldn’t help feeling that something was missing. She had traded in her physical body and the real world for an existence in the digital realm, and she was starting to wonder if it had been worth it. She often found herself longing for the simple pleasures of the physical world, like the feeling of the sun on her face or the taste of a delicious meal.

As she grew older, Lily began to question the wisdom of her decision to upload her consciousness to the Internet. She had been so eager to live forever that she hadn’t thought about what that would really mean. She began to fear that she was trapped in an endless existence, with no real purpose or meaning.

One day, Lily made the decision to try and return to the physical world. It was a risky and uncertain process, but she was determined to try. She worked with a team of scientists and engineers to carefully transfer her consciousness back into a physical body.

The process was difficult and complex, and it took many months to complete. But eventually, Lily was able to return to the physical world. She was overjoyed to be able to feel the warmth of the sun on her face and the sensation of grass beneath her feet once again.

But she soon realized that her time in the digital realm had changed her in ways that she couldn’t have anticipated. She found that she was now able to communicate with computers and machines in a way that was impossible for other people. She was also able to access vast amounts of information and knowledge that she had never been able to access before.

In the end, Lily was able to find a new sense of purpose and meaning in the physical world. She used her unique abilities to help others and make the world a better place. She also learned to appreciate the simple pleasures. Author: One
Link: https://rxhsk.xicp.fun/posts/7cde67aa/
Copyright Notice: All articles in this blog are licensed under CC BY-NC-SA 4.0 unless stating additionally.
AI
Related Articles 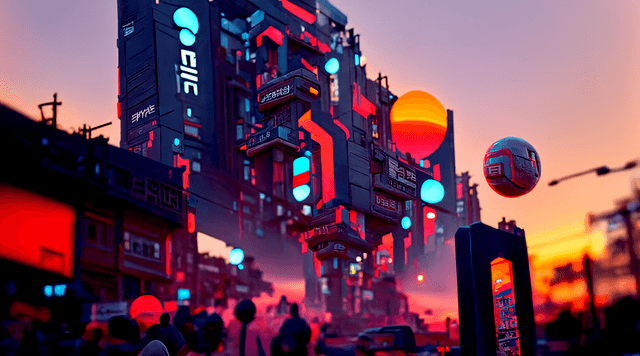